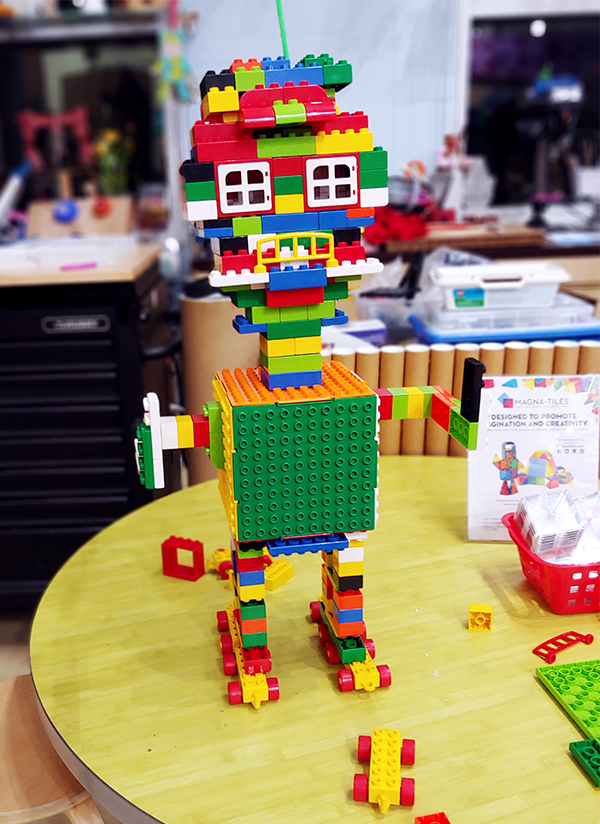 In 2018, Strictly Briks announced our first Makerspace program, intended to expand creative play while inspiring a new generation of engineers, designers, mathematicians, and beyond. We offered grants of up to $2,000.00 to museums which have a permanent maker space exhibit and who provided unique programming or community outreach initiatives directed towards children's education and creative development.

We're happy to say that museums responded overwhelmingly and the results have made us happier than we ever imagined.

Knock Knock Children's Museum in Baton Rouge, Louisiana, made great use of the toys we sent them and they were very popular in an event the museum held for children with Autism Spectrum Disorder (ASD).

"Thank you so much for the grant.  As a new museum, we never would have had access to so many options." - Hillary Perret, Learning Innovations Instructor at Knock Knock Children's Museum.

At the Knock Knock Maker Shop children can put their creative minds to the test with open-ended building activities.

Knock Knock chooses a monthly theme and designs programming to coordinate with that theme; for instance, one month was Engineering Month where visitors were challenged to build a skyscraper or another creation similar in height. March is Robotics Month, where children focus on robot-building activities. The Knock Knock Maker Shop is very flexible and changes its activities two to four times a month to make sure they cater to all age groups.

"All of the activities are open-ended," says Hillary Perret, Learning Innovations Instructor at Knock Knock. "Sometimes we do 'make-and-takes'... We also plan STEM-based programs related to our theme that 'pop up' in various other parts of the museum or outside in our big backyard."

Play 4 All: A Program for Children with Disabilities

Knock Knock Children's Museum hosts a monthly arts-and-crafts event, " Play 4 All", that caters to the sensory needs of children with disabilities. The event is hosted after hours and with autism in mind, yet is open to any child with a disability who might find visiting during the museum's regular hours uncomfortable.Children with certain disorders, most specifically those with Autism Spectrum Disorder, may experience sensitivity to activities that involve bright lights, loud noises, and crowds of people. Too much exposure to these events can result in sensory overload, ending with a kind of meltdown. To allow children with disabilities to participate equally in their makerspace program, "We lower the volume in some of our learning zones and create safe zones throughout the space," says Hillary.

Since the interpretation of auditory cues and feedback plays a major role in the development of speech and environmental perception in children, making sure that local volume levels are not too loud plays an important part in keeping the experience fun and safe for kids with ASD. The same principle applies to keeping local sources of light dim and areas of activity uncrowded.

"All the employees carry noise-canceling headphones [for the children] and put small fidget toys out. The art garden (our arts-and-crafts space) has electronic scissors that can be used with one hand. We have a large button so the children can turn things on and off with their elbow (or whatever) instead of using tiny switches. We tend to prefer to add accommodations instead of taking away activities."

"For example, we had standard-sized [toy] bricks out in the maker shop but I knew that would be too difficult for some. I added the larger ones so that both would be available. The unique shapes of the bricks allow our visitors to expand their thinking in multiple directions. I also took out the block-breaker game (Strictly Briks' Brik Buster). The tower falling apart was loud enough to be thrilling but not too loud to be overwhelming."

The museum offers additional accommodations upon request for any child who may need them. Since the Play 4 All program is run after normal business hours and caters to an audience with special needs, the traffic is less dense and solutions to problems, like lowering volumes in learning zones and providing noise-canceling headphones, are more universal. The museum also works closely with local experts to continue to make their program the best it can possibly be.

The Role of Strictly Briks in the Knock Knock Maker Shop

"The grant made it possible to have a large number of unique bricks at our ready disposal," says Hillary. "We are a new museum and a non-profit dedicated to education and play. We can concentrate on facilitating engaging play now instead of obtaining resources."